Molière in the Park’s Tartuffe

For the 2020 production of Molière in the Park’s Tartuffe, the greenery of The LeFrak Center in Brooklyn’s Prospect Park has been replaced by green screen.  But the production still provides a breath of fresh air with its engaging performances and a timeless story of a faker whose plots are foiled by love and loyalty.

Though there are obvious ties to today’s political and social currents (including a visual nod to a recent incident when someone used a bible as little more than a prop), for the most part this is a traditional rendition of the Comédie-Française staple.  Orgon, an aging landed gentleman, has fallen under the spell of Tartuffe, a wily vagrant who uses false piety to cover his lust and greed.  Though most of his friends and family try to warn Orgon about Tartuffe’s deceit, he will hear nothing against his new friend.  So taken is Orgon that he signs over his property to the conman and attempts to force his daughter to break up with the man she loves in order to cement the relationship in marriage.

lf translation of artistic work is tricky, then translation of verse composed by one of the greatest playwrights of all time is a veritable Cirque du Soleil act.  Fortunately MIP used a script created by Poet Laureate and Pulitzer Prize winner Richard Wilbur, who completely captures the gleaming wit and social insight of the original.  The production is directed with heart by MIP founder, champion of free theater, and Brooklyn resident Lucie Tiberghien. 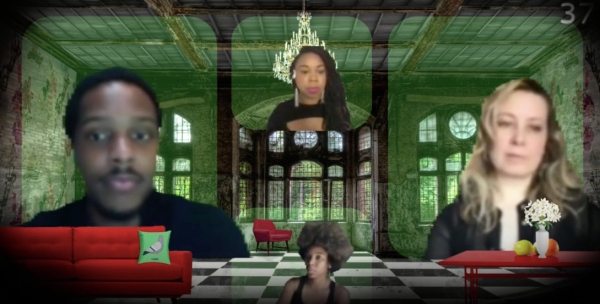 While it must have been frustrating for the artistic team (Kris Stone – Production Design, Andrew Carluccio – Video Programmer & Technology Consultant) to be confined to online resources, their choice to use green screen for the backdrop is an unfortunate one.  The effect is highly distracting, reminiscent of video games from the early 1990s, with parts of props and faces frequently dropping out.  Animated between-act bumpers by Emily Rawson and Jonathan Kokotajlo are somewhat incongruous, but charming.

This highly satisfying production of Molière Tartuffe is co-presented with the French Institute Alliance Française (FIAF) in partnership with the Prospect Park Alliance and LeFrak Center at Lakeside.  While this may not be the intimate night under the sky originally envisioned, moving online has provided a wonderful theatrical experience to a broader audience.  Replays with French captions have been extended until Sunday, July 12 on MIP’s YouTube channel (https://www.youtube.com/moliereinthepark).  The runtime is 90 minutes excluding introductions by the director, the producer and a Molière befitting the times.