The first glimpse of a miniature cardboard cutout of the London skyline sets the tone for an evening spent with Dr. Jekyll & Mr. Hyde.  Wildly creative and deceptively simple, this retelling of Robert Louis Stevenson’s classic novel is one selection from this year’s Fringe Encores line-up.  Well curated by Artistic Director Darren Cole and his team, the series brings to the nonprofit SoHo Playhouse the very best shows from the world’s most well regarded fringe festivals including Brighton, Edinburgh, Hollywood, Limerick, Orlando, and Toronto as well as New York.  It’s theater for lovers of lively and inventive works.

At first, the dapper Burt Grinstead as Dr. Jekyll plays straight man to Anna Stromberg, varying her accent and exchanging aprons, hats, pipes, and other bargain bin objects in rapid succession as she takes on every other character.  It’s a tour de force performance for the actress, who also directs the piece.  Several purposefully awkward lectures later, Mr. Grinstead gets in on the fun with his brilliant transformation from mild Jekyll into villainous Hyde, played out in effective silhouette.  From there, the pace accelerates until the play’s dramatic conclusion. 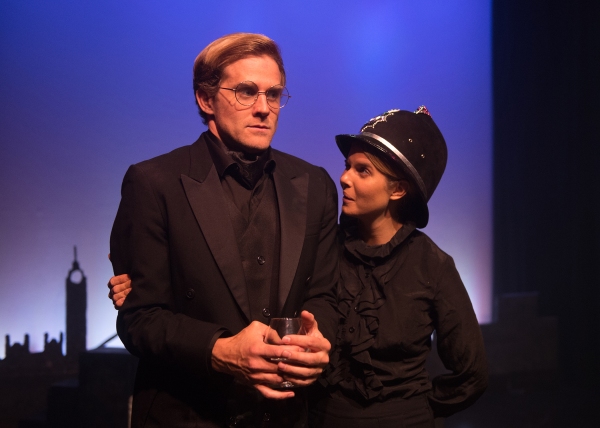 The two actors wrote the script, which is witty with just enough scare to keep audience members jumping.  Their adaptation retains many of the major plot points from the original book while taking quite a few creative liberties.  The character line-up has been streamlined.  This gives Ms. Stromberg the opportunity to show the full range of her talent without giving herself a coronary.  As playwrights, they have also infused the story with contemporary relevance: heightening the social commentary and playing up the frustrations associated with Victorian era repression by providing Jekyll with a feminist love interest.  It all works to tell a tale that is at once familiar and completely fresh.

The suggestive sets are composed of black interlocking wooden pieces with hidden compartments that reveal essential details in white.  Mood changes are emphasized with solid color lighting behind a plain backdrop.  These physical elements are augmented with a wonderfully produced soundscape of gulls, clock chimes, and musical flourishes.

At 75 minutes,  Dr. Jekyll & Mr. Hyde takes you on a highly engaging ride that ends before it can become repetitive.  With its pun-filled dialogue, clever production design and remarkably flexible two person cast, it’s low-budget entertainment done right.  And with tickets available for as little as $25, it’s also tremendous night-out bang for the buck.

The “best of the fests” runs through December 16 at the SoHo Playhouse, 15 Vandam Street off 6th Avenue near Spring.  To see a calendar of remaining performance dates and purchase tickets, visit www.fringeencores.org.