The Lifespan of a Fact

In this age of high anxiety and bitter divide, it didn’t seem possible that anyone could write a play that was both timely and hilarious.  Amazingly The Lifespan of a Fact — based on true events surrounding the development of an article about a Las Vegas teen’s suicide — achieves this blissful combination.  Written in vivid detail by nonconformist writer John D’Agata, the original 2005 article was assigned for fact-checking to an ambitious magazine intern, Jim Fingal.  D’Agata and Fingal’s conflict over the nature and role of facts spanned seven years and resulted in an essay and a book which in turn inspired Lifespan’s script by Jeremy Kareken & David Murrell and Gordon Farrell. With so many fingers on keyboards, this production could have been a cacophonous mess, but the logic and story are sound. Fingal’s on stage persona makes a strong case for journalistic integrity and thorough research.  Equally persuasive is D’Agata’s viewpoint that the right words, however poetic, are needed to attract and hold readers’ attention. Perhaps most importantly for Lifespan’s audience, their 90 minute argument elicits many cathartic chuckles.

The well crafted material hits the intended target in large part because of the wise direction of Leigh Silverman.  She has a keen instinct for when to punch up the humor without going too broad.  Rather, she peels back the layers of each of the three characters in slowly building rhythm.  She has the great advantage of being blessed with a magnificent cast, each of whom has an incredible sense of pace and timing.  Charmingly obsessive in his role of fact checker Jim Fingal, Daniel Radcliffe is physically taut and verbally cranked to 11.  He prepared for the role by actually working as a fact checker for New Yorker magazine, which clearly gave him a strong foundation on which to draw character details.  His opponent in the battle of wits, writer John D’Agata, is bought to irritated life by a blustery and brilliant Bobby Cannavale.  That the two actors are nearly a foot apart in height adds a shiny layer of physical humor on top of their perfectly orchestrated banter.  Standing between them with a commanding hand and a touch of grace is the charismatic Cherry Jones as the magazine’s editor, Emily. 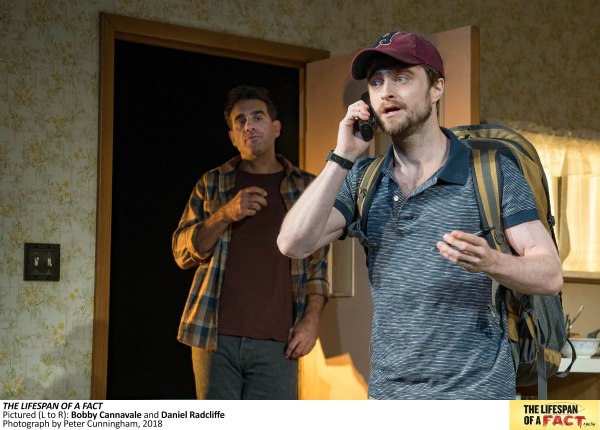 Many hands add their own magical touch to bringing out the best in the piece. Mimi Lien’s scenic design includes some smile-inducing details.  Linda Cho’s costumes give good visual cues.  The playwrights have raised the stakes by putting their characters on a four day deadline.  Projections by Lucy Mackinnon and music and sound by Palmer Hefferan keep us on edge as the clock ticks stressfully onwards towards publication day.

Suitable for teens and up, The Lifespan of a Fact brings much needed smart laughter to Broadway’s fall season.  Though the ending may be unsatisfying to some, the overall experience is everything you want from an afternoon or evening at the theater.  It is playing at Studio 54, which has particularly good sight lines.  Tickets for performances through January 13, 2019 are for sale at https://www.lifespanofafact.com and on most entertainment apps.  A limited number of affordable $40 seats are available for purchase in-person at the Studio 54 box office for same-day sale.