If you find that putting a face on an issue gives it meaning, you must make some time to experience playwright and performer Dan Hoyle.  In his latest work, this richly talented storyteller wears many faces to help us better understand the lives of Border People. Like the celebrated Anna Deavere Smith, Hoyle conducts  personal interviews — what he calls “the journalism of hanging out” — then weaves his subjects’ words into a rich tableau that shows us more of who we are as a nation.

For this piece, Hoyle spoke with people on the Mexican and Canadian borders as well as his old stomping ground in the South Bronx, which shares a socio-economic border with Manhattan.  Taking close to 18 months to develop, the picture is a disturbing one, though not without hope.  His careful editing works like Miracle Gro, helping tiny seeds of individual moments blossom into deep insight.  While the cloud of the Trump administration’s policies hangs in the air, the stories are more personal than political.  These borders are shaped as much by culture and opportunity as they are by geography.  One particularly sweet section centering on a young girl’s introduction to chocolate cheesecake is bound to make you better appreciate whatever little treasure worked its way into your day. 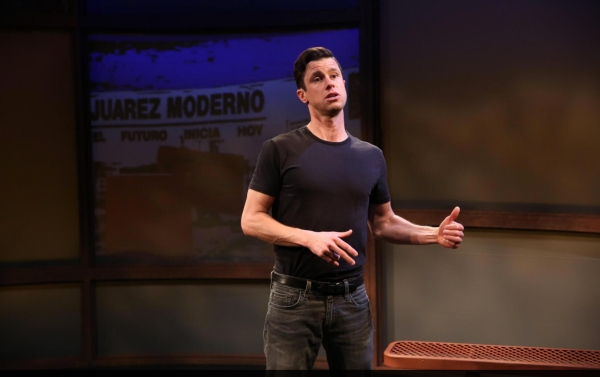 Originally developed with and directed by Charlie Varon, Border People has all the hallmarks of the superlative solo-show development tank, The Marsh in San Francisco.  While Hoyle may be a young white male, for 75 minutes this flexible actor IS also by turns Black, Hispanic, Muslim, gay and female.  As staged by Nicole A. Watson, the audience has the pleasure of watching Hoyle physically and emotionally transform to deliver others’ experiences in their own words. Each character is rendered with respect and obvious affection.  A projection wall (scenic designer Frank Oliva; video design Yana Birÿkova) adds further detail and sense of place.

All borders are constructs and can be deconstructed if only we take the time to listen and understand their impact.  Dan Hoyle makes a chink in the walls that separate us, shining light on the view beyond them.  Presented by Working Theater, Border People is currently running Off-Broadway at the Gural Theatre at A.R.T./New York Theatres (502 W. 53rd Street).  The borough tour starting March 3 and includes stops at the Snug Harbor Cultural Center on Staten Island, The Bronx Documentary Center, and the IBEW Local 3 in Queens.  Visit https://theworkingtheater.org/events/border-people/ for details and to purchase tickets.