The Play That Goes Wrong

If celebrated farce Noises Off struck you as too controlled, then The Play that Goes Wrong will knock your socks off, most likely while doing a pratfall.  A more apt title would be The Play That Starts Wrong and Goes Even More Wrong from There.  The entire two hours is loopy silliness, which is either cathartic or annoying depending on your taste.

Even before the curtain rises, we are immersed in the whacky world of The Cornley University Drama Society, a ragtag company of well-meaning amateurs.  Outside the Lyceum, posters of celebrities boast that they haven’t attended or did so to their great regret.  Inside, the cast wanders throughout the theater making small talk, many encouraging audience members to leave and go elsewhere in order to attend a better show.  This practice sets expectations for the messiness that is to come.

As gracelessly explained at the opening by director/designer/customer/prop maker/ box office manager/ etc, etc, Chris Bean, The Murder at Haversham Manor — the play within the play —  was chosen primarily for the number of parts it provides for his tiny organization.  So it is no surprise that the drama they present is a painfully bad jumble of stock characters, tired plot, and melodramatic lines, all the better to fall apart at the hands of the hapless players.  Whether they are reading keywords from their palms or substituting a flower vase for a misplaced notebook, the entire team is well versed in physical comedy.  It also helps set the tone that they come across as likable and well-intentioned.  This is unsurprising since the actors have worked together on multiple “…Goes Wrong” productions from Mischief Theater.

As the multipurpose Mr. Bean, Henry Shields sets the giddy pace.  While he doesn’t wear as many hats as his fictional counterpart, Shields did also write the play with his co-stars Henry Lewis and Jonathan Sayer, for which they won the 2015 Olivier Award.  He is wonderfully supported by Dave Hearn as the self-conscious Max who somehow landed two parts.  Broad broads Charlie Russell  as Sandra and Nancy Zamit as Annie battle it out to play the female lead role of Florence Colleymoore in full view of their horrified fellow actors.  In the smaller but crucial role of Trevor the Duran Duran-loving sound engineer, Rob Falconer never loses his focus except of course when he’s suppose to.  It is amusing to note that he also provided the original music. 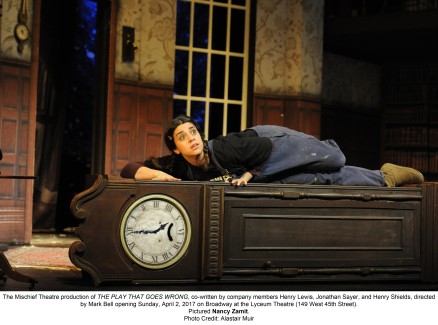 An equally important character is the set by Nigel Hook.  Every piece has impeccable timing.  Not since Alan Ayckbourn’s Bedroom Farce have I seen furniture collapse so slowly and perfectly.  (I will not give away any of its more clever secrets.)  The purposeful fiasco is deftly staged by director Mark Bell.  His training at Ecole Internationale de Theatre and experience teaching at LAMDA likely influence the more overt style of this buffoonery.

If you enjoy seeing one joke played to the millionth degree by an experienced good-natured troupe, pop on over to the Lyceum Theater for The Play that Goes Wrong.  Tickets are available http://www.broadwaygoeswrong.com through the end of the year.