N.B. This review is based on a late preview.

As film personalities on Broadway go, Michael Moore lands somewhere between a shining Bradley Cooper and a shunned Bruce Willis.  Stringing together personal accounts and observations, Moore makes some forceful motivating statements in The Terms of My Surrender. Unfortunately, these powerful moments are diluted by muttered off-the-cuff remarks and self-indulgent digressions. 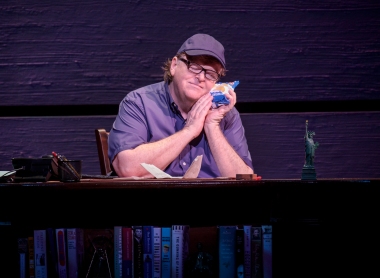 To be sure, there is plenty of anti-Trump rhetoric.  Moore has made it clear as a frequent talk show guest that he considers Mr. Trump an entertainer, unqualified to hold public office.  The show’s Playbill includes a somewhat sarcastic personal invitation to the President, written in Russian, to attend any performance.  But while Moore clearly has liberal leanings, he also recognizes that many of the issues about which he is concerned have roots before January of 2017.  He digs into his private vault of stories going back to the early 1970s to illustrate a number of social injustices and troubling trends that have only been magnified in the light of recent events.

Fans of Moore’s documentaries will likely enjoy learning about his formative years, when a combination of intellectual curiosity and a rabble-rousing nature led to the important discovery that anyone can make a difference.  These amusing and inspiring highlights are further enhanced by projections and videos by Andrew Lazarow making his Broadway design debut.  Tossed in are rapid sight gags (some of which work), a potentially funny game, a disturbing phone call, a needless interview, and a physical bit I won’t spoil in case it comes together after more rehearsal.  This piling on of elements resulted in a runtime of well over two hours on the night I attended.  That’s at least 30 minutes longer than necessary or desirable for Moore to make his point.  By the time he announced the terms of his surrender, I’d forgotten that was even the title of this work.  Moore is a bright and witty guy, but in this case he desperately needed an editor.

Director Michael Mayer, who was behind the vivacious and colorful revision of Hedwig and the Angry Inch, appears not to know what to do with what is essentially a monologue.  The stage seems to be unfamiliar territory under our hero’s feet.  One can almost sense the stage manager’s queues as he moves robotically from podium to desk set to faux living room.  At least there is plenty of distraction provided by David Rockwell’s backdrop of a magnificent and impressively functional American flag.

While I wish The Terms of My Surrender was a stronger piece, it has enough to recommend it.  Admirers of Moore’s films should take the time to see what he does with the live medium.  And those looking for a call to action in a polarizing political climate might well find one among his tales.  The limited run at the Belasco Theater is scheduled to end October 22.  Tickets and information are available at http://michaelmooreonbroadway.com.