Pack a bag full of whimsey and climb aboard Bonnie’s Last Flight.  This imaginative new play by the prolific Eliza Bent is taking off at Next Door at NYTW.  Your experience of the extended metaphor begins as soon as you receive your confirmation from the theater.  First class passengers are allowed to enter first and receive pre-performance wine and snacks.  (Though bibs on the back designate them as First Class, Comfort Plus or Economy, all the chairs are the same and there are no bad seats in the house.)  Upon entering, you are immersed in a representation of a cabin surrounded by oval windows and Virgin inspired overhead lighting.  Leg room is generous, though there is a limit of one carry-on per person.

Despite the title, the head of your crew is Jan. Thirty-one years ago during the rise of feminism, the then sexually naive teen found herself pregnant and alone.  She chose to carry the child to term.  Though she gave her daughter up for adoption, the chapter derailed her lifelong ambition to become a writer.  Taking a job as a “waitress of the skies” she continues to jot down ideas between trips down the aisle to serve brownies.  Her inspiration is a manic Mark Twain who is almost always by her side.  Recently accepted into a renowned Chicago based writing program, she’s finally hanging up her wings to follow her abandoned dream.

Jan’s story is one of many we learn during our fictional flight to Chicago and it is by far the most linear. The remainder of Ms. Bent’s script includes several personal episodes told by the rest of the crew as if glimpsed through cloud cover.  Jan’s counterpart is the well-meaning, high-energy and somewhat dimwitted LeeAnne who is also struggling to course-correct her life. Rounding out the cabin team is Jan’s devoted longtime colleague Greig, moved by items he finds left in seat back pockets and under seats.   Up in the cockpit is Tony, whose obviously lack of fitness to fly is one of the play’s plot holes.  His calling his co-pilot Erik “Jesus” is a running joke.  The troupe also portray other characters from the past.  To reveal more about the titular Bonnie would be a small spoiler, but she too is on board. 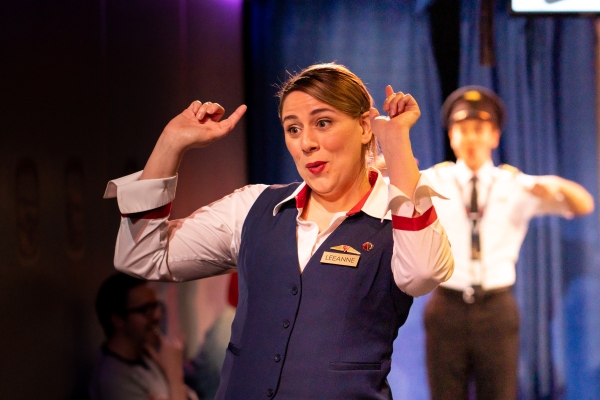 In the elegant and graceful body of Barbara Walsh, Jan is a marvelous character, surprisingly well rounded and deeply sympathetic given the short amount of time we get to spend with her.  Greig Sargeant’s Greig isn’t given as much depth, but he acts as a sweet partner and balances Ceci Fernandez’s frantic and funny LeeAnne.  While those three are tonally in sync, the others seem to have stumbled in from a much more farcical piece.  The cockpit duo played by Sam Breslin Wright and Federico Rodriguez veers firmly into stock character territory.  Playwright Eliza Bent’s own clown-like Twain nearly pulls the piece over the slapstick edge, though this is apparently integral to her vision for the work.

Director Annie Tippe cleverly choreographs the motion using the confined space defined by airplane body, aisles and jump-seats.  A good portion of the runtime is devoted to skits and business including clips of inflight movies.  This necessitates looking from side to side like a tennis match and occasionally completely turning around to see a curtained area behind you.  A few times, an unwitting “passenger” is included in the action.  Scenic design by Meredith Ries and costumes by Heather McDevitt Barton make the best of a small budget. Small overhead monitors expand the performance space and creative wigs and accessories make for quick changes.  The live action is supplemented by videos by David Pym and sound by John Gasper, which in previews had some technical glitches.  (For anyone who has tried to use Go-Go inflight wireless, this is not out of step with the rest of the gag.)

With tickets starting at $25, Bonnie’s Last Flight is a pleasant diversion, delivering some great fun and mild food for thought.  Can we lose our emotional baggage as easily as a major carrier sends the suitcase clearly marked for Rome to its hub in Abu Dhabi?  It is playing through March 2 as part of Next Door at NYTW, 83 4th Street near 2nd Avenue. Tickets are available online at NYTW.org, by phone at 212-460-5475, or in-person at the NYTW Box Office. Be warned that similar to a real flight, it will be impossible to leave before reaching the final destination.