(Note: This review is based on the December 24, 2016 preview performance.) 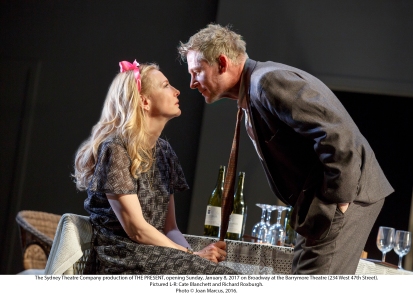 The supremely talented Cate Blanchett has come to Broadway.  Unlike many film celebrities who flounder on stage, Ms. Blanchett is the former co-artistic director of the Sydney Theatre Company, where she also made her theater debut nearly 25 years ago.  The same incredible nuance she brings to her on-screen characters is alive and in proper proportion in her role as Anna in The Present, a modern reinterpretation of an unpublished play by Anton Chekhov.  I would recommend this show simply for the opportunity to bathe in her deeply considered and exceptional work.

Furthermore, there are additional elements to be enjoyed here.  Just as her character has invited friends to celebrate her birthday, Ms. Blanchett and playwright/husband Andrew Upton called upon close associates to share in this production.  Richard Roxburgh — who is technically the star as the pivotal Mikhail— has played opposite her many times including in Chekhov’s Uncle Vanya and The Seagull.  When I say he makes a terrific libertine, it’s meant to be a compliment.  The cast is rounded out by other actors who have collaborated frequently at STC and elsewhere.  There is an easy flow among them that only intensity over time can produce.  The range of feelings comes across as genuine even when the words sound less so.  Of particular note is Chris Ryan who gives the fragile and naive Sergei remarkable depth in his few scenes.

If you‘ve ever slogged through a so-called lost work, you can imagine that the finding of the play itself is a mixed blessing.  The original piece is a 300 page rambling tale which was locked away in Chekhov’s desk where it was unearthed after his death.   Upton is certainly skilled at updating classics, giving them new life for a modern audience.  This is a more challenging task when the piece in question has been deliberately set aside by its creator after being rejected by its intended leading lady.  Particularly adroit at restyling pre-revolutionary Russian drama, Upton has previously adapted Uncle Vanya plus two Gorkys and a Bulgakov.  For this unnamed tome, Upton chose to move the period to the more accessible 1990s and age the characters to add believable complexity to their emotional lives.  (I recommend reading his author’s note provided in the program to help you jump into the world and understand the relationships he has sculpted out of Chekhov’s rock.)

The first act of The Present is nearly two hours long, yet it moves steadily on waves of insightful conversation and palpable emotion.  It is surprisingly the far shorter second act that gets bogged down when the vodka-soaked characters more consistently speechify and the plot turns frustratingly soapy.  Director John Crowley has added a naturalness – if also an aural challenge – to the action by having his talent move about without any conventional awareness of the placement of the audience.  Alice Babidge provides a clean canvas for the colorful characters with stark scenic and costume design.  Only sad balloons and tacky streamers are employed to communicate the less-than-festive air surrounding Anna’s birthday bash.  Stefan Gregory’s edgy music and sound design add several strong jump-out-of-your seats moments.

If you relish the opportunity to see deeply connected old friends *play* deeply connected old friends, make time to catch this somewhat uneven endeavor.  Limited engagement ends March 19, 2017.  For tickets and information visit http://thepresentbroadway.com.  Shorties like me should note that the mezzanine of the Ethel Barrymore Theatre has those high hand rails attached to each aisle seat and along the edge of the balcony.  At 5’1” I was just able to see over them from the third row.