Regular readers of this column know I pride myself on my no spoiler policy.  In the case of In & Of Itself , I couldn’t spoil it if I wanted to.  Is that because there is no plot?  Or because there are six plots?  As star Derek DelGaudio would likely agree, it all depends on how you look at it.

I was initially attracted to this production not because of Mr. DelGaudio, but by the notion of an event produced by Neil Patrick Harris and directed by Yoda… I mean four time Emmy winner and puppeteer extraordinaire Frank Oz.  What sort of mystery tour could possibly have attracted the backing of these two unique talents?  I’ve now taken the wild ride and my conclusion is “Of course.  Yes.  This one.” 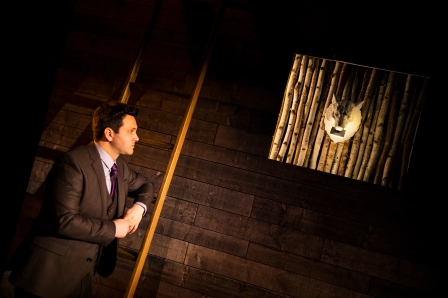 Derek DelGaudio in IN & OF ITSELF (c) Matthew Murphy

When attempting to describe the solo performer to me, my friend Jeremy called Mr. DelGaudio a magician.  True, DelGaudio has won the Academy of Magical Arts Award three times.  Nevertheless, I don’t believe that term really fits this storyteller/ fantasy travel agent.  He uses slight of hand the way most people in society use verbal persuasion.  It’s like Spalding Gray and Ricky Jay had a love child.  There are no rabbits or white doves in sight, though there is an elephant if one knows where to look.  Certainly I have never witnessed anyone else execute an illusion so profound and intimate it made someone cry, as happened to my friend.  (OK, I teared up a little too, but only cuz she was.)  I can’t imagine the self-preservation routine DelGaudio has developed in order to render this piece 8 times a week.  I’m going to need a visit to 16 Handles after just writing about it.

The direction by Frank Oz seems effortless, which is what’s required it in order to float through this evening.  There were a few occasions during which I wanted to look both in front and behind me, which was frustrating and perfect.  For once the term “production designer,” assigned to A. Bandit — the performance art collective founded by DelGaudio with artistic producer, Glenn Katino — is earned since the set would fit right in at MOMA.  Lighting by Adam Blumenthal is mood-transformative despite his techniques being unmasked in DelGaudio’s opening.  Original music by composer and Devo co-founder Mark Mothersbaugh hits all the right notes in all the meanings of that phrase.

Even in the season in which I saw Indecent, Sweat and Dear Evan Hanson, In & Of Itself rocked me to my core.  Be among the lucky ones to grab yourself a ticket for the run — now extended (for a third time!) through May 6, 2018.  Visit http://www.inandofitselfshow.com/#home, especially if you can picture yourself clearly on the steps of the landmark former Union Square Savings Bank having a fairly personal post-show conversation with 199 strangers.

At least that’s what happened to me.

And it was magical.