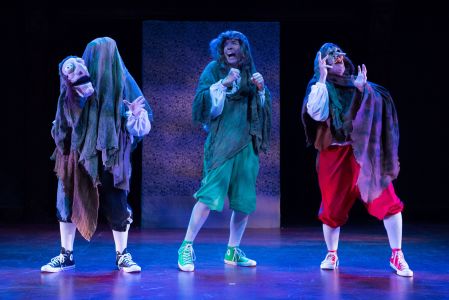 Since 1981, the Reduced Shakespeare Company has been delighting audiences of all ages with their mixture of classical theater, history, clowning, improv, and general silliness.  On the occasion of their 35th anniversary, this RSC (definitely not to be confused with the one based in Stratford-Upon-Avon) developed William Shakespeare’s Long Lost First Play (abridged).  The fanciful premise of their latest offering is that in a parking lot in Leicester, the company’s three members found the long lost first play written by William Shakespeare.  (This location is in fact where the skeleton of Richard III minus his feet was found not long ago.)  In this treasured manuscript, the then 17-year-old playwright first created his most famous characters, blending them Infinity Wars style into one sprawling nonsensical story.

The “war” at the center of this fictional work is a battle of magical wits and styles between Ariel from The Tempest and Puck from Midsummer Night’s Dream.  They duke it out using some of Shakespeare’s favorite ploys including mistaken identity, instant attraction, and shipwrecks.  The RSC playwrights use the opportunity provided by this mashup to include some audience favorites who have limited stage time in Shakespeare’s originals.  About two-thirds of the script is bona fide Bard generously blended with pop culture references and vaudeville schtick.  As a believer in the ‘loyalté me lie‘ vision of Richard III, I was particularly gratified by the acknowledgment in the script that Shakespeare portrayed his queen and her family in a good light and their enemies in a far less flattering one.

All of the 45+ characters are brought to buoyant life by co-writers and co-directors Reed Martin and Austin Tichenor along with boyish player Teddy Spencer.  The three are whizzes at delivering iambic pentameter and rimshot worthy jokes in equal measure.  They even interact with the audience, at once point providing the front row with water pistols to simulate a storm.  The entire piece is performed in front of a single cloth backdrop created by Tim Holtslag.  Sounds including trumpet blasts and ocean waves along with strategically placed spotlights help set locations. Character definition is highly dependent upon the contextually brilliant Halloween Warehouse level costumes and outrageous wigs provided by designer Skipper Skeoch.  Also invaluable are the even cruddier looking props cooked up by “goddess” Alli Bostedt.  Kudos to stage manager Elaine M. Randolph and her curtain-call shy team for the amazingly quick changes behind the scenes.

William Shakespeare’s Long Lost First Play (abridged) simultaneously provides an engaging introduction for older children and laughs for culture nerds.  It is currently in its off-Broadway premiere run at The New Victory Theater, through March 11, 2018, as part of a 20-city tour throughout the United States. Tickets start at $16 and are available online ( http://www.newvictory.org/boxoffice ) and by phone (646.223.3010).  The theater may offer booster seats, but the recommended age of 10 and over should be heeded to avoid excessive seat-back kicking and squeals of fatigue from your own little Mustardseeds and Peaseblossoms.