Off Off Broadway, Play, Uncategorized December 10, 2018 Leave a comment

The shattering impact of an “I love you” with a “but” clause is at the heart of The Baby Monitor, currently mounted as a workshop production at the 14th Street Y.  The plot centers around the suspicions a woman harbors concerning her gay cousin’s treatment of the toddler son he shares with his husband.  By fleshing out this nightmare scenario with all-too-common misunderstandings stemming from distinctions in race, class and religion, playwright David Stallings has delivered something far richer than an issues play.  It is a thoughtful examination of the ways in which simply tolerating differences rather than embracing them can cause irreparable damage to our societal fabric.

The scene opens on a family Thanksgiving.  Rejected by most of his strict Catholic family after coming out, Damon has invited his close cousin Claire and her husband Josh to join him and his husband Phillip to celebrate the holiday along with their two-year-old son and nanny.  The evening includes a great deal of reminiscing and chardonnay and concludes with flipping through the new family’s photo album.  A combination of tainted religious doctrine and personal frustration leads Claire to react inappropriately to one of the pictures.  Her misguided good intentions have the potential to destroy the happiness of everyone involved. 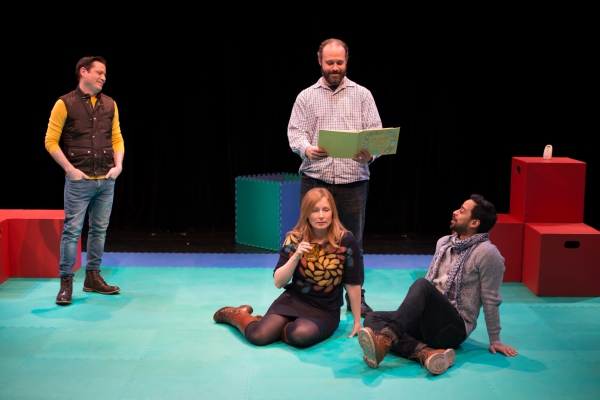 Even at a time when gay marriage is legal and children stemming from these unions are not uncommon, it has been hard for many people to move beyond ingrained beliefs.  Stallings realistically explores a variety of viewpoints stemming from these slow-to-shift societal norms.  The genuine danger that can grow from preconceived notions is revealed in peeling layers.  While there is certainly an ideology that skews left running underneath, the dialogue is stealthy, with little slips of the tongue that indicate early on that Claire’s love for Damon has many qualifiers attached to it.  By making Phillip and the nanny Soledad immigrants from the Dominican Republic, Stallings can additionally explore the role culture and class play in the escalating tensions.

Stallings also stars as Damon, a performance infused with deep passion.  Héctor Matias is positively dreamy as Phillip, accustomed to keeping up his guard except around the family he clearly adores.  Stallings is less successful in his drawing of female characters.  Though Amanda Jones strives to manifest Claire’s sympathetic backstory, the character is essentially unlikable and therefore challenging to portray.  This is magnified in her scenes with Leo Goodman’s wonderfully nuanced Josh, who is most often given the voice of reason.  Greta Quispe similarly struggles to give balance to Soledad, whose personal journey could make for an equally compelling play.  However, Mel House is strong in her too-brief performance in the critical role of activist Shelly.

For this production, the black box theater has been set up in 3/4 round with a simple set of padded tiles and wooden boxes.  Lighting designed by Kia Rogers is used to shift the setting and to mimic a violent climatic moment.  Direction by Stallings’ husband Antonio Miniño is skillful, with an engaging blend of quiet touching moments and palpable strain.

As much as it is a powerful drama, The Baby Monitor is also an important conversation starter.  Developed on both coasts of this divided country, it would be wonderful if this work could find its way into the middle.  The production contains very brief partial nudity and is recommended for ages 16 and over.  It is playing through December 16 at the 14th Street Y, 344 East 14th Street near 1st Avenue.  General Admission tickets can be purchased by calling 646-395-4310 or by visiting www.differenttranslation.com.  Prices are $25 for adults and $22 for seniors and students.  $5 rush tickets are available 15 minutes before curtain for those living in zip codes 10003 and 10009.