Being unmoored feels as haunting as any creature to the characters in The Brothers Paranormal, opening tonight at Theatre Row.  Max left behind a fulfilling life in California and moved to the midwest to look after his mentally ill mother Tasanee and alcoholic brother Visarut.  Attempting to restore his financial stability, Max has partnered with Visarut in a ghost-hunting venture.  Delia and Felix have come to the same town after being forced out of their home in New Orleans by Hurricane Katrina.  They are all brought together when Delia hires the brothers to rid her apartment of a malicious spirit only she can see.  Though Max is a non-believer, he is a pragmatic businessman and more than happy to take Delia’s money for an easy night’s work.  Felix goes along with the plan hoping to prove his wife’s visions are real and not the onset of madness. 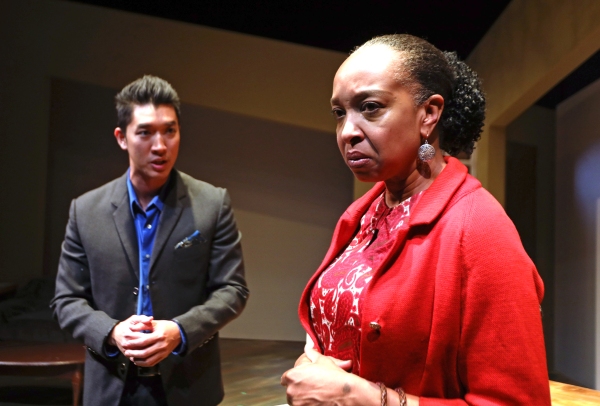 The timing of this world premiere production by Pan Asian Repertory is auspicious. Modern audiences have been primed to experience the blend of comedy, social commentary, and horror that are entwined throughout Prince Gomolvilas’s script.  The lifespan of a typical play makes it unlikely that the playwright was inspired by Jordan Peele’s groundbreaking Get Out, but the sensibility is similar if not as artfully executed.  There are chills, chuckles, and deep reflections on displacement, along with family-oriented conversation.  The second act begins to drag with too much exposition and the ending is a disappointing “specter ex machina.”  But the overall journey is an entertaining and surprising one.

Talented director Jeff Liu does his best to navigate the many moods and styles, which are in near-constant transition.  The gasp-inducing horror elements are achieved with well-crafted lighting design by Victor En Yu Tan and perfectly-timed sound by Ian Wehrle, along with a magical assist from special effects expert Steve Cuiffo.  It is the logic behind the hauntings that is flawed.  It is explained to us that ghosts follow their own rules, but horror purists will be particularly frustrated by the inconsistencies of the other-worldly occupants.  Gomolvilas fares much better in the comedy realm where his zingers are delivered with flair, most especially by Emily Kuroda as the sly and insightful Tasanne.

Sheryl Liu’s sparse set allows us to focus most of our attention on the characters.  Gomolvilas has chosen to explore the intersection of African American and Thai American cultures, particularly as they relate to superstition and the afterlife. Common ground is found and differences acknowledged and respected.  There are also interesting distinctions made between the viewpoints of Max who was born in America and the rest of his family who immigrated from Thailand.  It is especially in the heartfelt moments that Gomolvilas’s writing skills shine.  The chemistry between Dawn L. Troupe’s warm Delia and Brain D. Coats as her charming husband feels genuine.  More astonishing is the connection formed between her and Vin Kridakorn’s seat-of-his-pants Max. The relationship that develops between client and hoaxer is fresh and ultimately brings about extraordinary feelings of hope.  Natsuko Hirano and Roy Vongtama round out this strong cast.

As the month in which we recognize both Asian Pacific American Heritage and Mental Health Awareness, May is the perfect time to bring the unusual and twisty The Brothers Paranormal to our consciousness. The play is currently at The Beckett Theatre at Theatre Row (410 West 42nd Street) for a limited engagement through Sunday, May 19, 2019.   Runtime is 2 hours plus an intermission.  Content is intense and may be inappropriate for children under 8. Ticket prices range from $62.50 – $102.25.  For more information and to purchase, visit https://www.telecharge.com/Off-Broadway/The-Brothers-Paranormal/Overview.