Strangers in the Night

Composed of two one acts and a monologue, Strangers in the Night is a diverting if uneven entertainment.  Produced by Hunger and Thirst Theatre and doubling as a fundraiser for the Pay It Forward Foundation, each piece explores the consequences of connecting with strangers.

In Patricia Lynn’s Screwed — the most gripping section — the playwright performs the lead role of Molly, evoking sympathy as a young governess under arrest for the murder of one of her charges.  A sincere Patrick T. Horn is Peter, a local policeman whose sister, the previous governess, is presumed to have committed suicide at the same location.  Brandon J. Vukovic rounds out the cast as Molly’s suspicious boss, Mr. Douglas.  Inspired by Henry James’s The Turn of the Screw, the script cleverly lays out opposing perspectives of events, sprinkling in elements of #MeToo and the ageless desire to be heard.  Lynn’s experience as a feminist Gothic writer shines through.  The assured hand of director Caitlin Davies builds tension and curiosity even as Molly barely moves from her chair. The result challenges the audience to examine what is fantastical and what is believable. 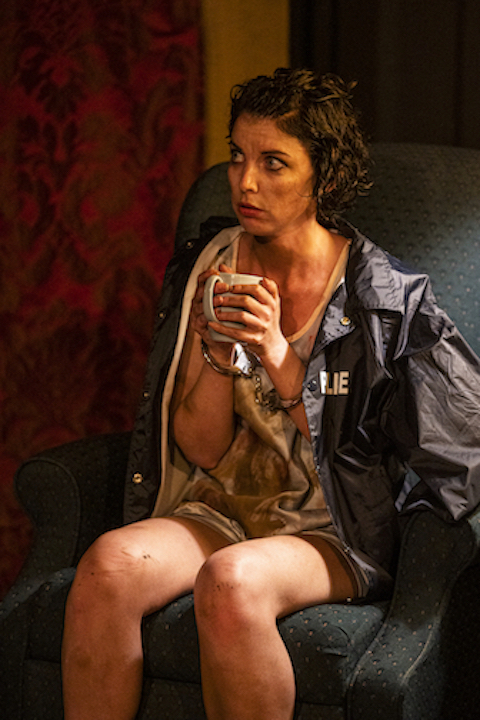 Working as a counterbalance to this traditionally constructed story is the nonlinear Bottling Dreams of The Tearful Don’t Knower.  At opening, there is a man gathering tears from a pool in the woods.  He is intending to bring them to his “Other Half” who has cried herself dry and is consequently at risk of losing her sight.  Instead, he entices a flamboyant stranger into a sexual relationship which waylays him long enough to cause Other Half to panic and brings on an attack of self-loathing.  Created by Emily Kitchens and directed by Paul Kite, the work mixes staccato dialogue, exaggerated pauses, and simulated homosexual sex (intriguingly choreographed by Adin Walker) into a statement about need and identity.  It is punctuated with outbursts emanating from an art installation which displays an array of brightly colored cultural images on four screens. The three actors — Philip Estrera, Dillon Heape and Natalie Hegg — do a masterful job of delivering heightened material in natural style, finding human motivation in odd poetic phrases.  The video display is at once binary with its ones and zeros and non-binary with its gender neutral voice.  While the storytelling is creative, the scenes are often disjointed and the viewpoint ultimately hazy.

Attempting to tie these two disparate pieces together is a monologue.  Speaking in mannered tones and gesturing like a ring master, Frank (Jordan Kaplan) introduces each one act before sharing a personal story of his own.  This final chapter, written by Mr. Estrera, is thinner than the others, but makes for a sweet end note.  Lighting designer Wesley Cornwell, sound designer Randall Benichak, and video designer Ben Charles do their part to give this event cohesion by setting an uneasy mood throughout.

Whether you prefer your psychological entanglements eerily concrete or avant guard, Strangers in the Night has something to offer.  It plays through October 26 at The West End Theatre.  Runtime is about 90 minutes without intermission.  General admission tickets are $15 in advance, $20 at the door.  To purchase tickets and for more information, visit www.hungerandthirsttheatre.com.  Note: The venue is located on the second floor of the Church of St Paul and St Andrew on West 86th Street between Broadway and West End Ave.   The space has a slight echo which may be challenging for the hearing impaired, but the seats are comfortable and the rake is terrific.