The Son is going to Hell.  This is not a spoiler, but rather one of the opening lines of Max Posner’s The Treasurer.  This assured destiny stems from his loveless relationship with his self-centered and fiscally irresponsible mother, Ida Armstrong.  It is a wearying connection only hardened by her slow mental deterioration. The play is partially autobiographical, the second such dubious attempt produced by Playwrights Horizon this season. (The first was For Peter Pan on her 70th Birthday, Sarah Ruhl’s ode to her mother.  Interestingly, both Ruhl and Posner were writing students of the magnificent Paula Vogel.)

There is an almost therapeutic feel to some of the Son’s monologues.  Deeply personal scenes like the return of a pair of pants to Talbots may not translate for someone who is not Ida’s grandson.  Posner adds even more distance between characters by having the bulk of the dialogue take place on the phone.  But the biggest challenge with this story is that their family tie isn’t particularly tumultuous either.  The Son eventually complies with Ida and his siblings at every turning point.  Audience members seeking warmth — or at the very least electricity — at the heart of a production will be sorely disappointed. 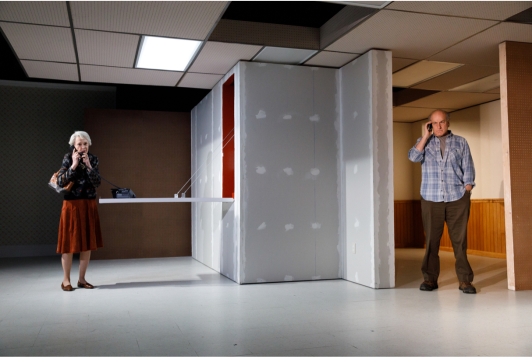 Deanna Dunagan and Peter Friedman in The Treasurer ©️Joan Marcus

Fortunately for all ticket-buyers, the performances are gripping.  Theater vets Deanna Dunagan and Peter Friedman take on the roles of Ida and her perpetually challenged Son.  Both give deeply human interpretations despite little new or informative ground.  Friedman is our guide here, frequently addressing the audience to share his exasperation, utter disbelief, and eventual acceptance.  Dunagan manages to lend freshness to Ida’s all too familiar arc of decline and multitude of stock scenes.  They are brilliantly supported by Marinda Anderson and Pun Bandhu, color-blind and gender-fluid in multiple roles.  Despite obvious talent, these two can’t quite replicate Ida’s once vibrant social circle, the more detailed loss of which would have given Ida’s failing more meaning.

David Cromer’s staging is difficult bordering on the bizarre.  Characters are often addressing each other from three distant points on the stage, making viewing more similar to a tennis match than a creative endeavor.  In the case of Anderson and Bandhu, actors sometimes start a scene as one character, then have to slide into another in a beat.  Laura Jellinek does what she can to support this vision with a compartmentalized minimal scene design.  Shout out to Brett Anders and his stage management team for slipping in to keep each section updated with the proper touches.  The lighting by Bradley King sets the tone with the houselights slowly dimming during Friedman’s first speech.  Sound design by Mikhail Fiksel includes perfectly replicating the tinny sound of cellphones and the stiltedness of online chatbots.  Lucy Mackinnon’s projections are attractive, though it’s hard to see how they clarify the plot or intensify the sentiment.

Those who relate to Playwrights Horizons’ mission to support emerging writers as well as those who believe in the crushing power of guilt, may be attracted to spending 90 minutes with The Treasurer.  It has been extended in the Peter Jay Sharp Theater through November 5, 2017.  For tickets and information visit https://www.playwrightshorizons.org/shows/plays/treasurer.