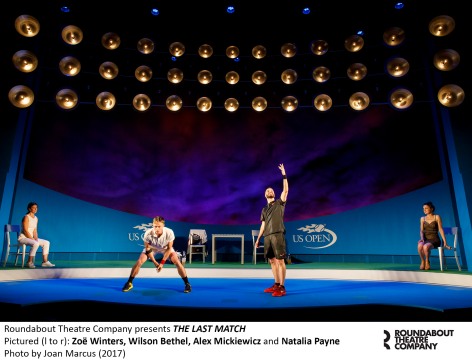 If the notion of a twelfth deuce point doesn’t tie your body in knots of exasperation mixed with exhilaration, Anna Ziegler’s The Last Match may not be the play for you.  The tightly woven story of two couples whose lives revolve around professional tennis relies heavily on having at least a basic understanding of the sport.  For those who are fans, it makes for an engrossing 100 minutes.

To mention the scenic design so early in a review is usually not a good sign.  But Tim Mackabee’s artistic rendering of the US Open is completely captivating and functions almost as a fifth character.  All the world’s a court and the men and women merely players.  The set pieces are accented by Bradley King’s mood-setting lighting which shifts from glaring spotlight to swirling night sky.

This splendid background does not distract from the terrific performances that take place in front of it.  Alex Mickiewicz is a standout as Sergei Sergeyev, a man for whom every decision is a tough one.  There is a captivating tautness to his tone and body language that is deeply honest and moving.  As the All-American Tim Porter, former tennis player Wilson Bethel expresses the combination of anxiety and drive that propels many champions to reach the top.  His wife Mallory is played by Zoë Winters with a dazzling mixture of tenderness and fortitude.  The quartet is rounded out by Natalia Payne as Sergei’s tough as nails fiancé, Galina.  Her pacing is perfection, but she misplaced her accent on several occasions, slipping from Russia to Queens.  This was particularly odd given that Ms. Payne has been with the play since its world premiere at the Old Globe in San Diego.

The piece is still considered a new work and may continue to developed, but it is already clear that the storytelling is wonderfully nuanced. Though there is a huge rivalry at its center, there are no bad guys in this tale.  We experience four realistic people just trying to do their best.  Ziegler picks her moments well, telling the audience so much in every glimpse through a window into their lives.  Director Gaye Taylor Upchurch manages to make scenes of tennis — effectively done in pantomime — and home life both past and present blend beautifully into four portraits that in turn become one.

While the tennis-as-life metaphor may limit the breadth of potential ticket-buyers, it really works.  It is a sport that is at its best when opponents have a respectful understanding of one another.  Each shot is the result of a decision, sometimes at an instinctive level.  Performance can be easily be influenced by the reaction of outsiders in the crowd.  And there’s weight to pondering how you will be remembered when it’s just not your day to win.

If you enjoy being caught up in the passions of others, The Last Match provides an immersive opportunity.  It’s a worthy time investment, though I could understand those who left confused or even frustrated not knowing a let from a footfall.  Tickets are available through December 24 at https://www.roundabouttheatre.org/Shows-Events/The-Last-Match.aspx.