On a soundstage, a talented production team is preparing to shoot an AT&T commercial featuring beloved Luke Wilson.  The creative concept is to drop red gumballs around the star to symbolize all of Verizon’s dropped calls.  Despite a lack of time to test the hastily put-together rig, prop lead Rob is able to toss the small projectiles just shy of Luke’s shoulder and the first few takes go smoothly.  Then a case of nerves sets in and a few of the hard objects hit Luke squarely on the head.  The actor sees stars; the director —award-winning documentarian Errol Morris — sees excitement and orders the crew to deliberately aim for the performer on the next take.

This is the set-up of the aptly named Dropping Gumballs on Luke Wilson, which is based on true events.  Though the Directors Guild of America takes set safety very seriously, sadly there are occasional incidents of a director demanding a dangerous shot, as happened in this case.  Rob Ackerman accurately has commercial Assistant Director, Alice, threaten to report Morris to the Guild.  The script also provides enough background to realistically make her vulnerable to manipulation.  It’s a creative stand-in for any project on which a concerned would-be whistleblower has instead been made complicit through intimidation.  If only the playwright had trusted his audience to get his very clear and impactful message.  Instead, after a lively and thought-provoking 55 minutes, he burdens the additional 20 with outright lectures on broader issues and political topics ranging from gender discrimination to Nazis.  It’s an unnecessary departure from the previous territory that mars an otherwise engaging production.

First time director, famed playwright Theresa Rebeck, does an imaginative job of bringing us deep inside the physical set of the commercial and the mind set of each participant.  The results are visually stimulating and often laugh-out-loud funny.  The assorted screens that are employed by Morris for playback at the shoot are also used to show us the crew’s previous experiences that have brought them to this critical moment.  (Yana Birkukova provides the ideal video design.)  The nearly all-white set designed by Christopher and Justin Swader shows off these projections to great effect.  Emphasis is achieved by Mary Ellen Stebbin’s well-placed lighting, which often shifts to a befitting green-screen green.  The look is completed by the essential craft service table.  Costumes designed by Tricia Barsamian will make any production pro feel right at home.  All-important clever props are provided by Addison Heeren. 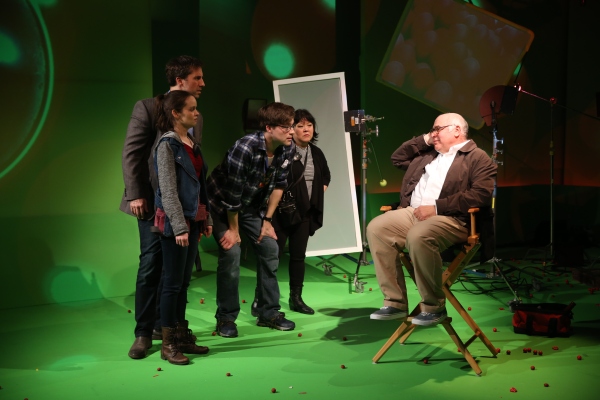 The Cast of Dropping Gumballs on Luke Wilson; Photo by Carol Rosegg

As a former prop person, Rob Ackerman makes the prop man, also named Rob, his spokesperson.  George Hampe does a fabulous job of growing increasingly manic as character Rob struggles to remain the voice of reason and the closest thing we get to a hero.  With a get-on-with-it gruffness, Dean Nolen is well cast as his boss and seasoned rigger, Ken.  Reyna De Courcy is less successful at maintaining an appropriate emotional build in the role of their assistant, Jenny, becoming akin to a cartoon character with jerky motions and high-pitched yelps of displeasure.  With enough charm and swagger, Jonathan Sale could easily be Luke Wilson’s deliberately pudgy body double.  It’s less easy to know how well David Wohl impersonates Errol Morris.  The part is written in one obnoxious note, though the theater vet certainly manifests a typical ego-driven artist.  In the toughest role, Ann Harada swings rightly between assuredness and fear as Alice, but she struggles to differentiate the other small parts she takes on in memory and flashback.

Ackerman’s love of television production and those who strive to keep it creative and truthful shines through despite a dip in the ending.  It is easy to see why both Luke Wilson and Errol Morris have given the project their blessing.  With a little reworking of the last section, Dropping Gumballs on Luke Wilson has the makings of insightful modern satire.  Running time is 75 minutes with no intermission.  It plays through July 6, 2019, in the Mezzanine Theater at at A.R.T./ New York Theatre (502 W. 53rd Street). Tickets are $25 for union card holders, $30 general admission and $40 for reserved seating.  For purchasing and additional information, visit TheWorkingTheater.org or call the Box Office (Ovationtix) at 866.811.4111.